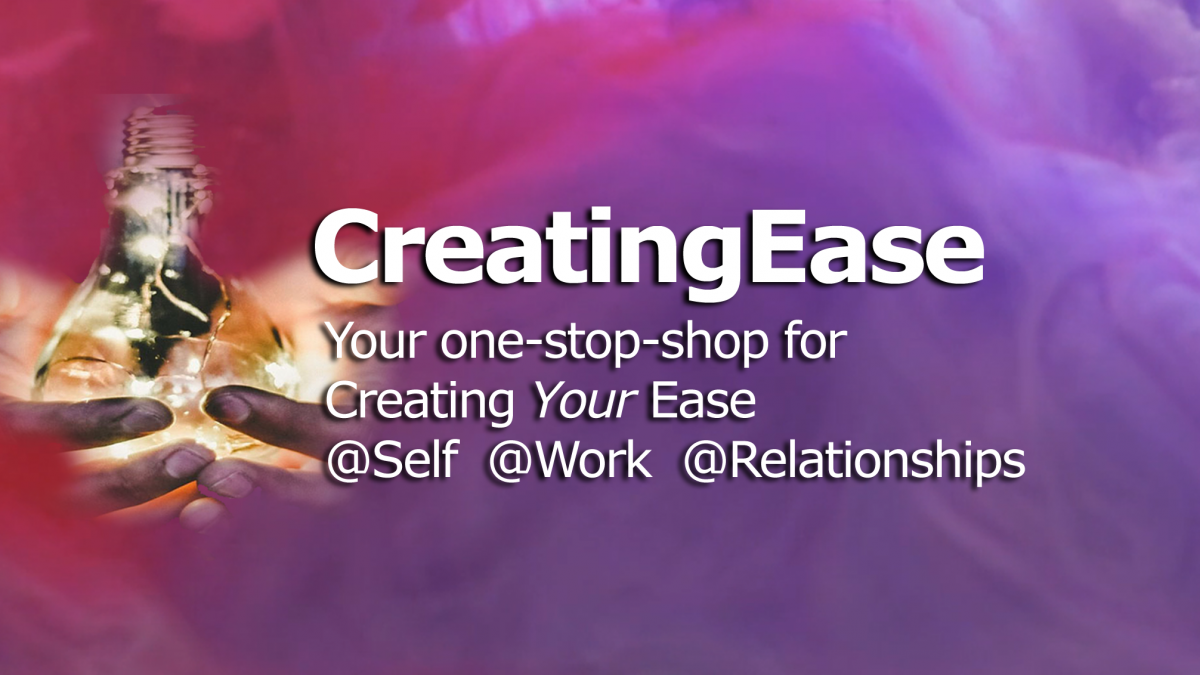 You might have noticed a higher intensity of life problems, a not-enough-time to get things done and a reduction in thinking throughout from one ...

You might have noticed a higher intensity of life problems, a not-enough-time to get things done and a reduction in thinking throughout from one end to the other! As most of us are not filthy rich, we are pushed to working more hours which leaves us with less time …

So, how can we manage the intensity of our lives?

How can we flow with the up and downs of life’s waves while maintaining sanity, good health and well-being?

Are there methods we can implement to help us ride these waves with more Ease?

Can these methods be practiced individually or with groups?

Can Ease be cultivated?

Ease is an achievable outcome by integrating a powerful new skill-set with freedom and choice, unleashing your innate potentials in rightfully regaining personal sovereignty within unity consciousness, a togetherness of life.

Togetherness is a highly important aspect of life, it unites us, it gives us a sense of belonging and a much-needed support: where there’s two (or more) the stability increases and the weakness disintegrates.

For the past several years I have been leading an extraordinary evolutionary process called Creating Ease, a re-unification of the Individual with the Collective, a Togetherness in rightfully regaining our personal autonomy within the unity consciousness that transcends the interpersonal realm.  Creating Ease is for the people and about the people, Together with people.

I have brought this togetherness not only in group spiritual practices but within the workplace organization as well, and have observed some miraculous transformations within the people, a unity of mind, heart and soul where all flowed seamlessly through the waves of life.

There is a sacred nurturing beyond the words, so listen with your heart in order to hear what is communicated: it is the heart that unites and it is the mind that separates. Yet the most flexible part of the human body is the mind!

So what aspect of the mind separated you from Ease? From unity? From togetherness? Which Thought patterns? Religion? Judgmentalness? Liking or Disliking? Mean people? Poor health? Broken heart?

Your individual beliefs and values coupled with your behavior is what constructs your reality.  It comes from your mind through your behavior and it creates your experience of life.

In a togetherness consciousness, unifying the thought patterns is done by collaboration and cooperation without the need of followers, where each creation is owned and credited to individual creators and not allocated to private profits, but creating thought-patterns (and later behavior patterns) and products that satisfy human needs and benefit the collective through togetherness.

Everyone can contribute what they can, and everyone can get what they need, in togetherness.   In unity consciousness, leadership functions merely as a structure for connecting the needs of humans with the gifts of the creators, without scaling personal  profits, instead combining efficiency with relevance.

Fame seekers -a byproduct of virtual socialization- look to increase the number of their followers, accidentally exploiting and oppressing the consciousness of the collective towards specific thought patterns meant to attract more followers for the fame seekers.

The fame seekers (even those unconsciously seeking fame) their thought-patterns are incapable of improving the human needs because the fame seekers need to compensate for personal profit, where an increased number of followers will generate more personal financial profits

In the “fame-seekers-followers” model, the Ease is created for the famous, miss-allocating resources from the innocent followers to the fame seekers owning personalities.

Togetherness in unity consciousness transcends the interpersonal realm: Creating Ease is for the people and about the people, together with people.  Unity consciousness is created by collaboration and cooperation, by contribution to the greater good.

Growing up I’ve noticed how a large number of people being already gifted with an innate sense of compassion, a naturalness of togetherness, being part of community, collaborating and cooperating, an unselfish togetherness that cannot be taught, a united consciousness that can be achieved only by experiencing living inside/within it.

These people were born and lived their lives in a natural togetherness and they’ve already created a higher collective consciousness.

The separateness occurred during socio-economic progression to materialism for personal profits, infusing thought-patterns of valuing the materialness over togetherness, having one believe that togetherness is lesser-than materialness, and that materialness is the only form of expressing individualism.

In unity consciousness, leadership functions merely as a structure for connecting the needs of humans with the gifts of the creators, without scaling for personal profits, instead combining efficiency with relevance to not only satisfy the needs of people but to increase the well-being of everyone.

This is why the Creating Ease model was conceived: satisfying human needs, regardless of their national origin, culture or color, the need for Respect, Success, Acceptance, Forgiveness and Love.  A 360 degrees application of these thought-patterns and behaviors, giving, receiving and contributing these behaviors all at the same time.

1. Respect is [should be] a given. Respect yourself and simultaneously be aware of respecting others and respecting all of life.

2. Have your thoughts directed towards succeeding at each of your projects / endeavors while simultaneously acknowledging your success and the success of others.

3. Have your attention on what is acceptable and what is not acceptable to you and be successful in accepting others as they are, while accepting that which cannot be changed by you.

4. Forgiveness is a choice that provides flexibility; while forgiveness is not  about approving, forgiving yourself and others enriches ease and well being, simultaneously for you and for the others.

5. Act /do /behave with love and out of love, together with respect, acceptance, forgiveness being successful at it, expressing gratitude simultaneously for yourself, for others and for all of life.

RE-DE-FI-NING and A-PPLY-ING these five ingredients of ease to/from all 360 degrees angles, will create Ease into your life and the life of others, and will usher you into fully shifting in Togetherness, in unity consciousness and staying there!  Riding the waves of life from and with unity in togetherness, honoring each other and overall life.

Give ease a chance!

We will show you the way…